It my Pleasure to Bring you Big Game 2010. This year there will be 3 CEO’s Space Ghost, KewlBreeze and TheButcher.

Each of us will be bringing 4 corpies for a Total of 5 people including CEO . All Other players who would like to be part of this tournament are Invited to Join the Draft Pool and be Picked in turn by the 2 Captains.

The Draft Sign up ends on 2/17 and then the Two Captains will Draft thier Team.

The Game itself will start on 3/17 at 8PM and the game will be held at twgs.classictw.com

If you Sign up for the Draft you may be Drafted by and of the 3 Captains..Any Personal Issue’s Can be worked out between CEO’s by Trading.

The TWA File for this game is attached to this post https://www.classictw.com/viewtopic.php?f=14&t=25603

Replicate the TW Prompt In Linux

Make a look-alike bash prompt for Linux by adding this line of text to the end of your /home/username/.bashrc file…

Here is what the prompt contains…

This was originally posted by Cogwheel at ClassicTW.com.  Please note the server pointed out is no longer active.

For those of you already using PuTTY, I have released a modified version (source) which adds a configuration option to return the cursor to the top left after a clear screen (Settings->Terminal->Clear screen homes cursor). TradeWars’ ANSI files expect this behavior of DOS’ ANSI.SYS which is technically in violation of the ANSI standard. I’ve attached a screenshot comparing the two versions landing on Terra.

If you don’t already use PuTTY and would like to have a go, I’ve also created an installer package that includes PuTTY, Bitstream Vera Sans Mono (my favorite monospace font), and is pre-configured to connect to my TradeWars server, including all the appropriate appearance settings to make it look right. You can change the settings to log into whichever server you want, or use pageant.exe to give you easy access to multiple configurations. 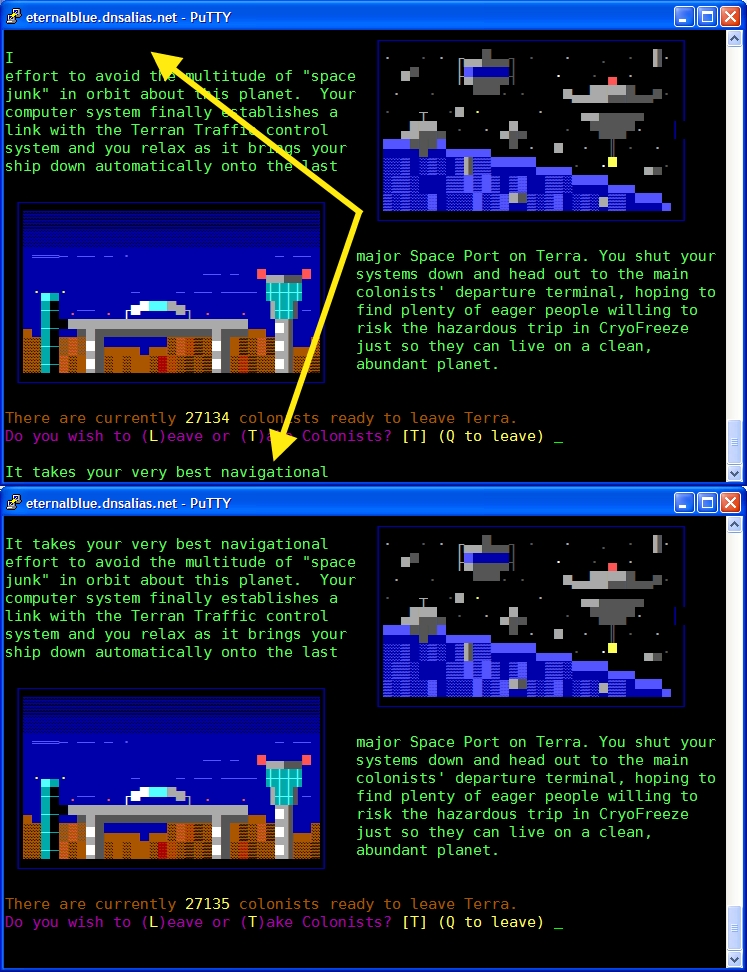 We’ll Be Here Another 5 Years (at least)

Just renewed the domain for 5 years.  I doubt I’ll ever let this site die after 11 years or so already.  It’s older than my oldest child, for goodness sakes.

It’s that time of Year again ! It’s time for the Haunted Halloween Tournament. !!!!

This years Tournament will be hosted by telnet://twgs.classictw.com/ And Moderated by ElderProphet.
The HHT will Start at 8pm on 10/31/09 …..
The HHT is a HIGHLY Edited Game that has Had some regular settings But has Never Been *exactly* the Same from Year to Year..I have provided FULL disclosure and Will Be playing.
All Issues to be Handled by ElderProphet and his decison is FINAL.

The TWA that is being provided will also be the MAP used in this Game. Import the Game With All map Edits!!! Do Not Rebang the Game if you Want an Accurate Map.Just import it and open it as is.
Some Basic Settings include but are not limited to.
1200 turns 15k Sector Universe **No Time Limit** 6 members per corp ….Many Other Exciting Settings!!!!
Various Ship and Planet Edits

The HHT Edit Will be opend up for practice at telnet://twgs.classictw.com/ as soon as possible

A few poeple have pointed out that i didnt post Rules and Have asked there to be an End date….It’s Unlikely,,, but VERY possible,, that this game/edit could be Stalemated. I dont want to be playing the HHT at Christmas this year.So I sought out Advice from a few players and have come up with a solution.

2. In the Event the End Date is reached the following point system will be in used to determine a Winner.

In the Case of some Conflict ie double exturn or game data corruption The Game Moderators Decision is Final. (Game Moderator = ElderProphet )

also to be more clear
There is No Rules against Information Sharing.
Mega Corping is defined by the Sharing of Hard Assetts ie.Figs.Credits,Citadels,Sectors.
YES Mega Corping IS against the rules.

I am Happy to Announce The First Ever EIS Invitational Server Tournament.

This is an Invitational Tournament for the Servers Who Advertise thier Rebangs at EIS Classic TW Forums. The Game is meant to Reflect an Effort to balance Edits and poke holes into certain strategies and aspects of the game.
While the General Edits were BigD’s there have been modifications that he cant be held responsible for. The Complete edit will be available for Download with this post.

The Game Host will be a Commercial Server and will be announced soon.

ElderProphet will be setting up the Game with a Random seed and will have all the passwords to the server.

The Game Moderator will be *** EleqTriziT *** Meaning what he says goes.
This means ALL Decisions on ANY complaints or Suspicions will be His and he is Finale.

This will be a Points based game Keeping the points Very easy to tally at game end……At the end of the game ElderProphet will Export the game and make the file available to download from this forum. ElderProhet will tally the points and anyone can doublecheck his findings..

Rules
1 no Duping . No playing more then 1 account . No accessing your teammates account or your enemies account,No Subs if one player activates an account that is it.If he quits for any reason including tragedy in personal life..You are down a corpy with no replacement available.(Random dupe checks conducted by ElderProphet)

2. Bug Use is forbiden..This means GAME bug use…Spoofing a script is NOT against the rules.If you find a Bug you must report it to EleqTriziT via a PM at this website.

4. No ship or planet buyouts allowed.

5. The Moderator is God and can make any controversial decisions

Points system to be kept simple.

Also No Death limit and it may look like a Blue Game but I promise you,you will Need REDS…

All Controversies to be decided upon by EleqTriziT.

Score will be done by ElderProphet but can be checked by all after the game ends.

Teams can Enter the Tournament by having the Sysop of the Server Post thier team in this thread.

The Following Active Servers are invited.

Incase i forgot any **ANY SERVER Who Posted a Game Rebang within the Last 12 months in Tw Classic is invited**Sign Up Here!

I’ve moved The Stardock to hosting outside of my own house for the first time ever.  This shouldn’t mean much to anyone but if you have a problem with TWGS Search, this might be why.  TWGS Search should still be updating and running fine, but we won’t know 100% for awhile.  If you have problems, IM me (ICQ:7971550, AIM: EleqTriziT) and I’ll take a look.

We had a Great Time in Kansas City!!! ok from left to right …Auntie B in front of her Xanos, Beside her is Drexler aka Pixie..In front beside Xanos is Macahan(from SWATH&Fament) and Behind Macahan is the Infamous TR Edwards,,Next to Macahan is Myself Space Ghost..And on my arm is Willow The bald guy behind me is T0yman and the guy beside T0yman is Merlin (willows husband)..Taking the Picture is Supermom from Fament (macahans wife)

Thanks for all who came out!!! Can’t wait to do it again sometime!!!!!